Take a Seat: Exploring the Chair Throughout History

Everywhere you go, people are doing it. People do it at home and at the workplace constantly. You’ll find people doing it while waiting for the bus or at restaurants while eating. We see others do it so often, we don’t bat an eyelash. It’s the one activity practically everyone participates in and we all learn to do it before we walk: Sitting.

Taking a seat is such a mundane action, one that we seem to just do without stopping to think of why. And while humans have sat on the ground since the very beginning, we found evidence dating as far back as the Neolithic period suggesting that human beings decided to start elevating themselves above the ground. Because of this desire to park it on something other than the floor, the evolution of the chair has been a remarkable journey showcasing human creativity, ingenuity and adaptability, from the simple stone “seats” discovered in Neolithic dwellings to the iconic Eames Lounge Chair still popular today.

Exploring the Chair Throughout History 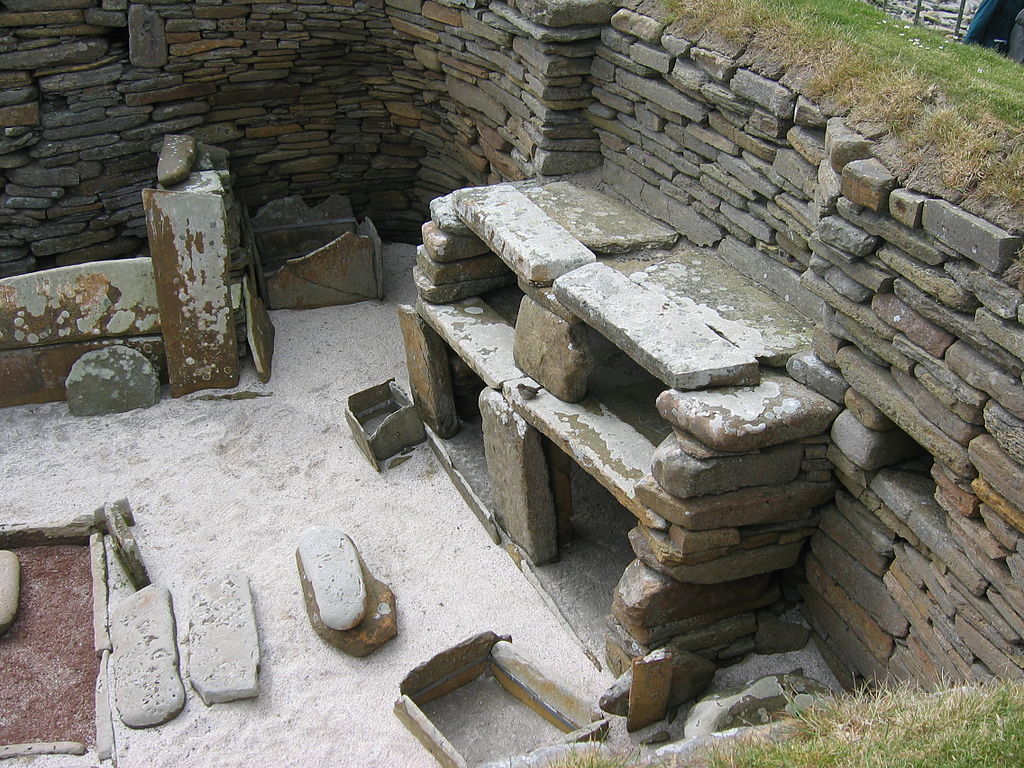 Some cite the Neolithic village of Skara Brae, Scotland, as the earliest known seating, dated as far back 3,200 BC.  Archeologists found homes there that showed evidence of domestication including doors, beds, tables and seating. These seats, composed of stone, show early signs of our human desire to elevate ourselves above the ground. 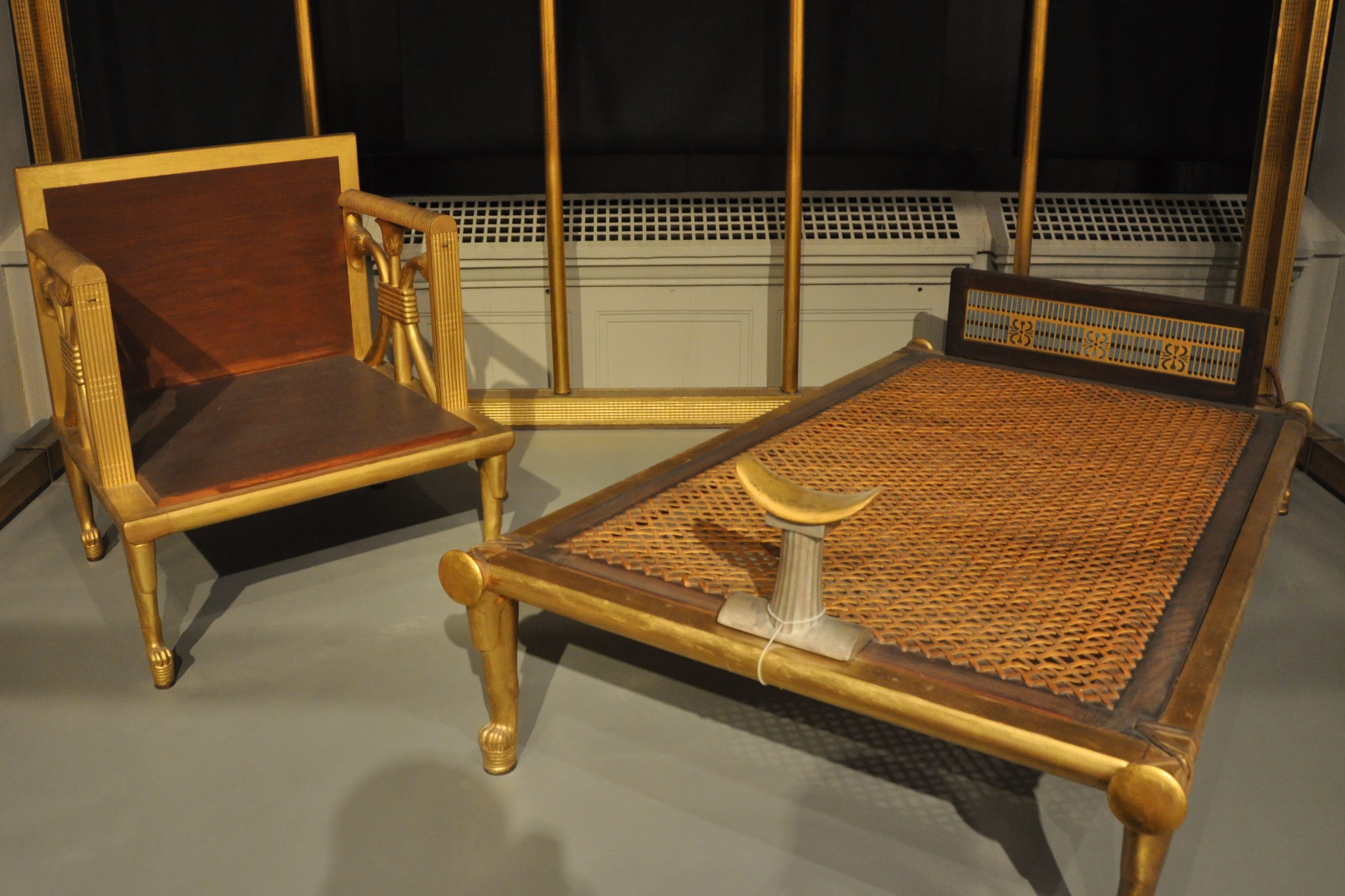 Early use of stools – three-legged, four-legged, and even folding – in ancient Egypt soon gave way to chairs with backs and arms. Ornate arm chairs made of wood with overlaid gold and silver were found in the tombs of Queen Hetepheres I and King Tutankhamen.  These arm chairs features strong lines and exquisite detail including carved lotus flowers and animal legs. The discovery of King Tut’s tomb in 1922 took the world by storm, and echoes of ancient Egyptian chairs and ornamental motifs can be seen in Art Deco furniture and decorative arts.

The ancient Greeks perfected the form of the klismos chair with legs that curve under the seat before flaring outward. The curved back indicates attention to comfort and ergonomics. Although the chairs themselves didn’t survive, they are frequently depicted in relief sculptures and vases. The simple yet elegant curved lines of the klismos chair made the form popular among Neoclassical designers in the late 18th and 19th centuries. 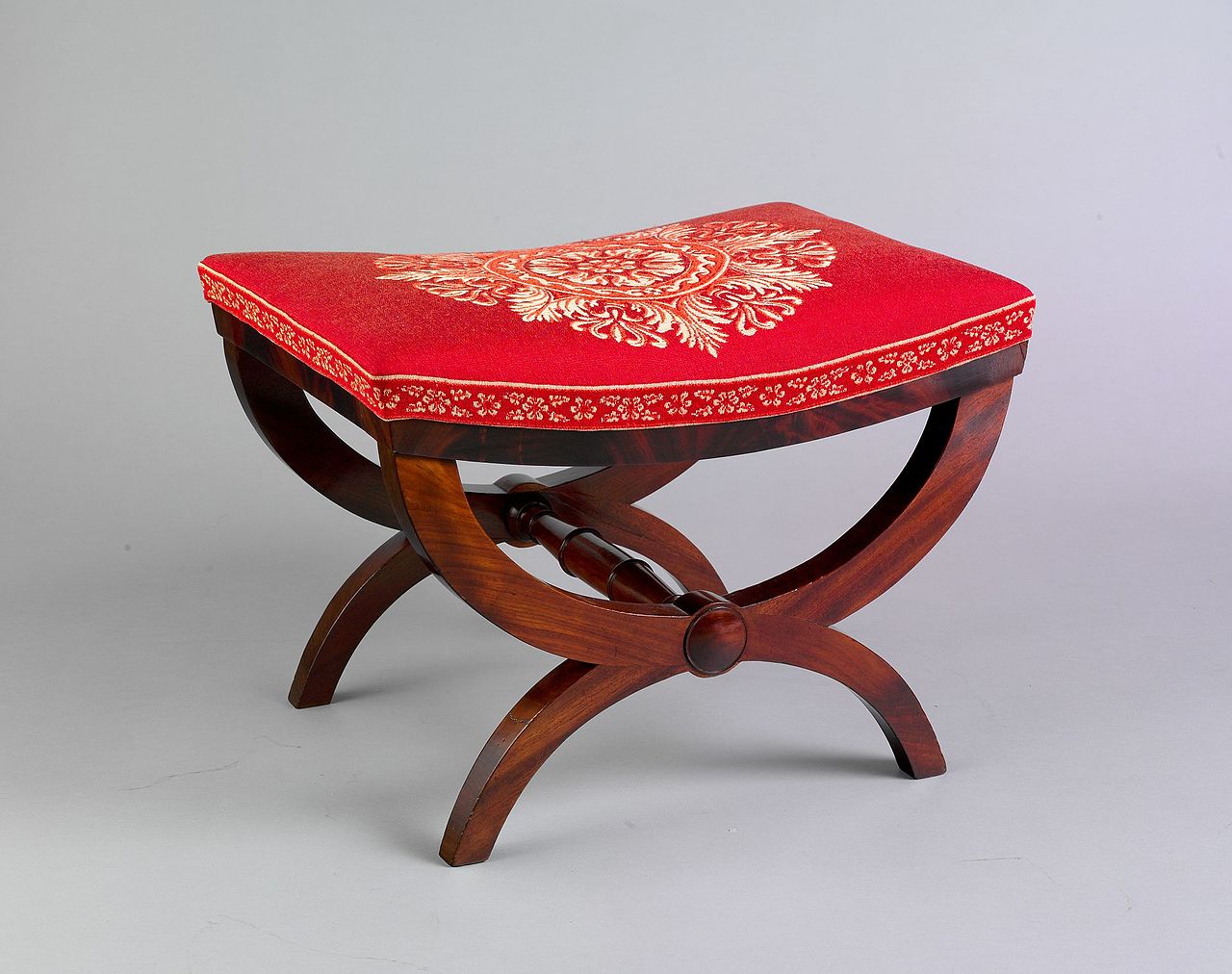 Although the ancient Egyptians and Greeks used stools with an X-frame of diagonal cross braces, it was the ancient Romans who elevated it to the decorative heights that made it popular all the way into the present day. For centuries, the curule chair was reserved for use by royalty, dignitaries and other important political and religious officials.

In medieval Europe, royal thrones and other ornately decorated seats were symbols of power and authority. Religious officials commonly used X-frame seats known as faldstools, derived from the Roman curule seats. This elaborately detailed seat belonged to the Merovingian King Dagobert I.  “Four protomes of panthers form the feet and legs; the armrests consist of two carved and perforated panels, decorated with rosettes (bottom) and plant motifs (upper register)” (wdl.org). But unlike the Greek klismos chair, medieval furniture reflected the prevailing Christian emphasis to asceticism and the virtues of discomfort rather than ergonomics. 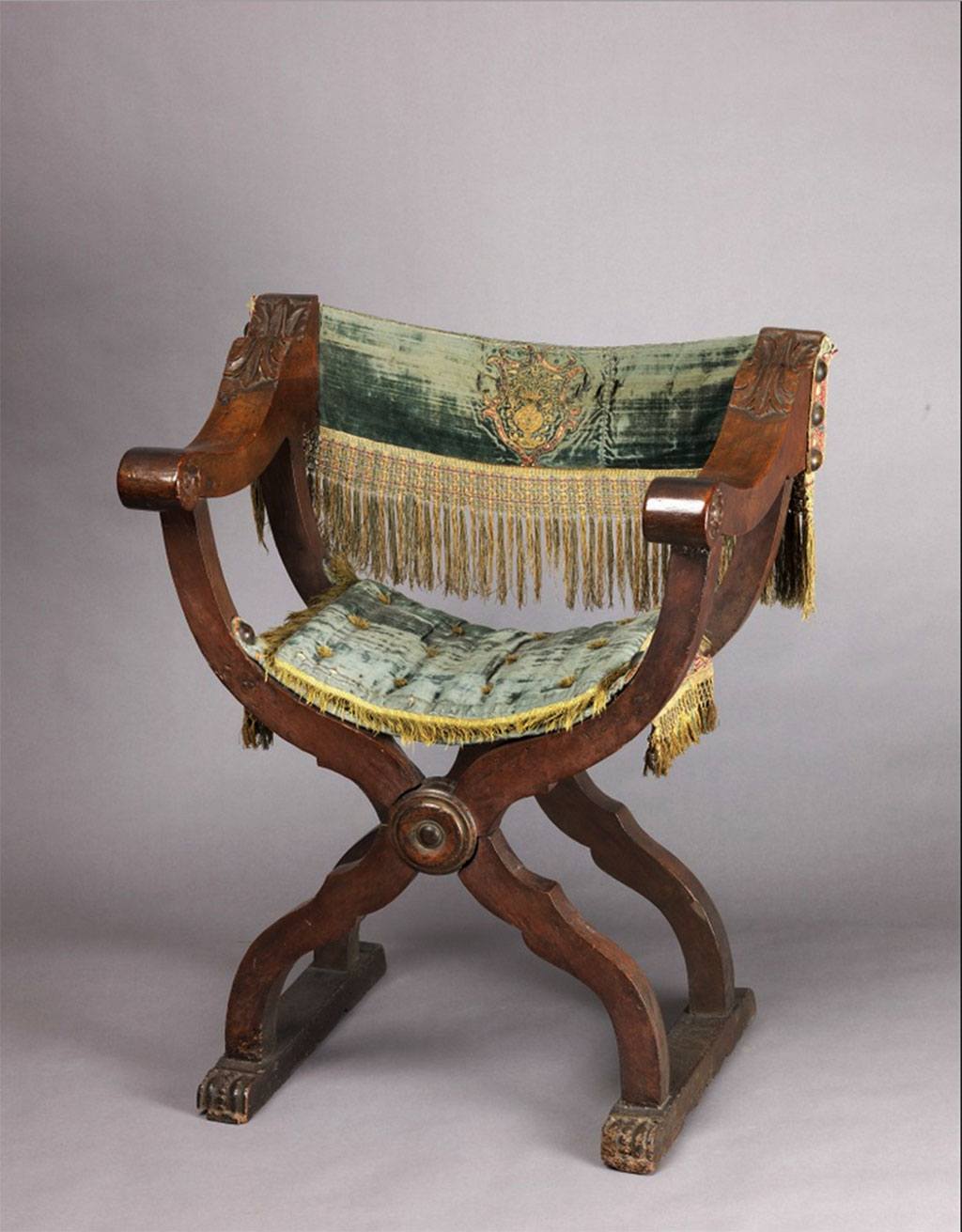 During the Renaissance, the ancient Roman curule form was again reinvented, with different variations appearing in different regions. The dantesca chair with velvet or leather upholstery, and the savonarola chair with a hard back and loose seat cushion became popular in Italy. Chairs with three or four legs, sometimes called stool chairs, also became popular during this time. Previously used only by royalty and other powerful figures, chairs now made their way into the homes of aristocratic and merchant families. 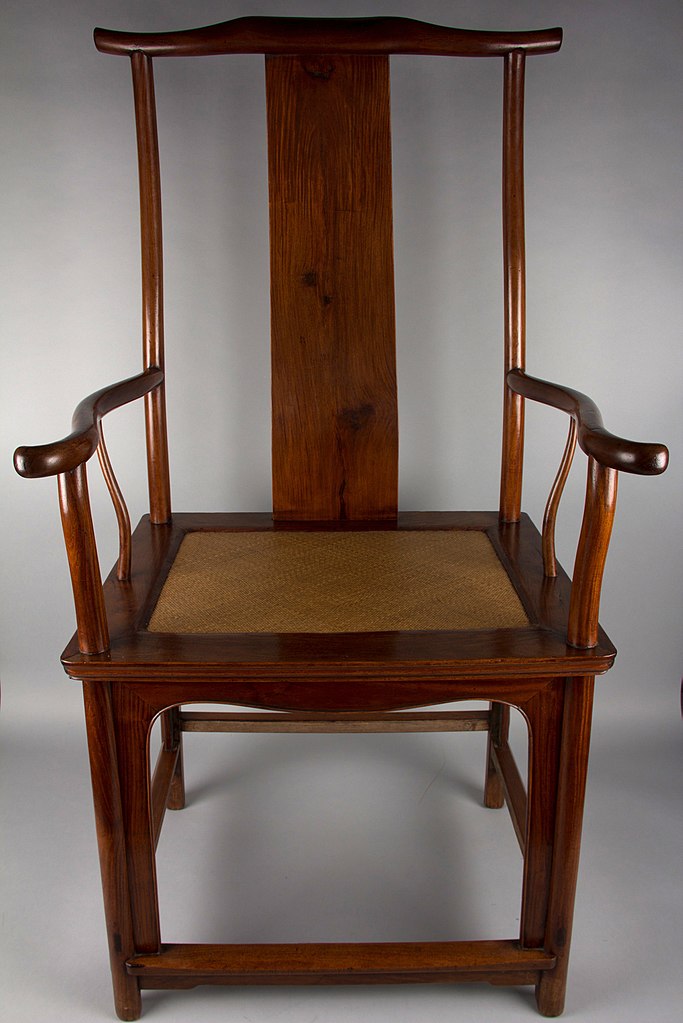 The association of chairs with authority wasn’t limited to Europe. While armchairs were common among the elite in China by the time of the Tang dynasty (618-907), not until the Ming dynasty (1368-1644) did they become a fixture in households of lower rank. Most of the forms we now recognize as traditional Chinese gained popularity during the Ming and Qing (1644-1911) dynasties. 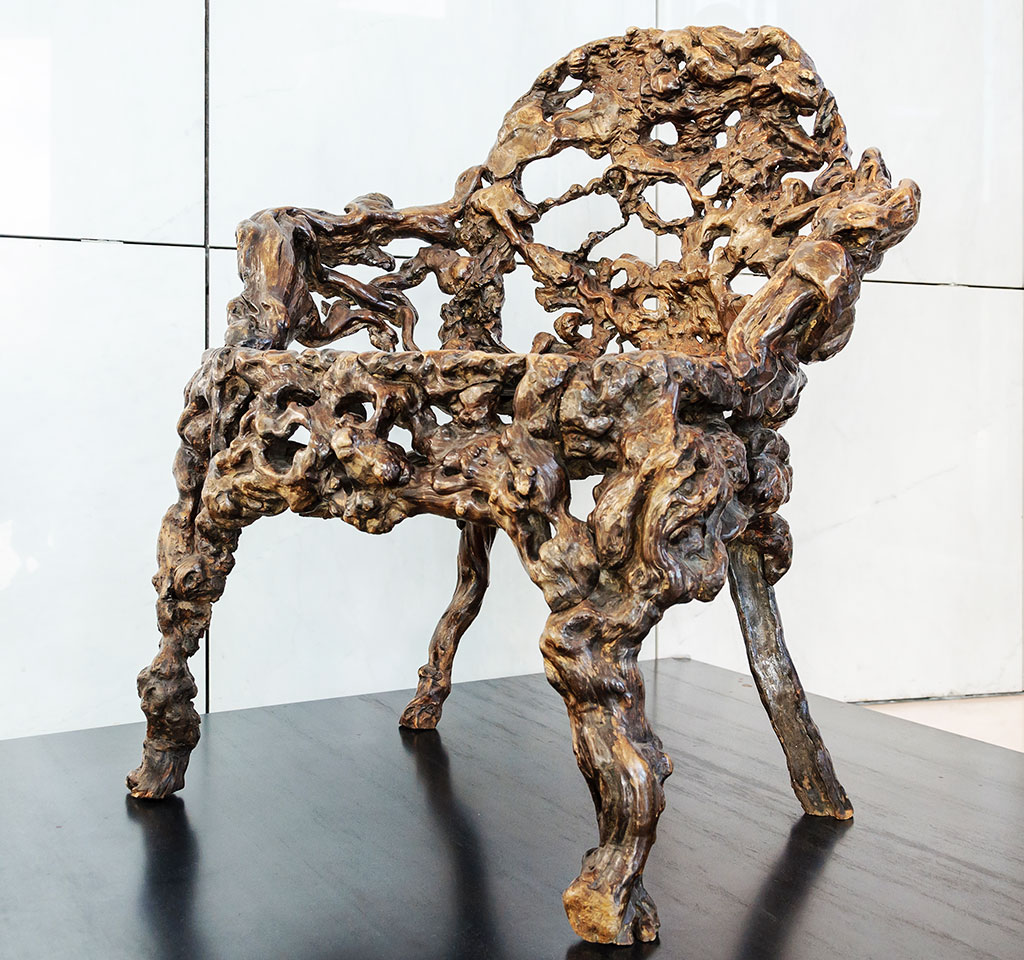 The traditional Chinese art of root carving, carving furniture and objects from the roots and gnarled branches of trees, has also been used to craft chairs from the Tang dynasty forward. The organic beauty of these forms particularly appealed to Buddhists and Daoists who prized harmony with nature. 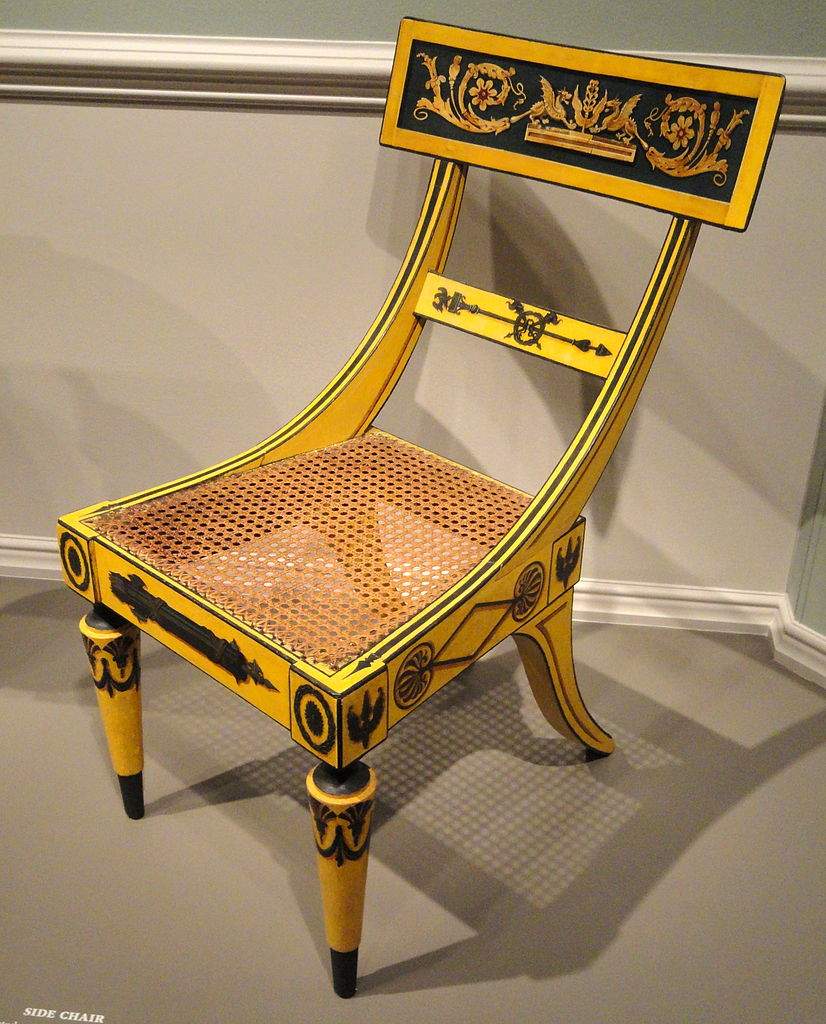 After the opulence of the Baroque and Rococo periods, Neoclassicism reigned during the late 18th century. Mahogany imported from the Americas became more readily available and was used in elegant chairs and other furnishings.  Although most Neoclassical forms reference the straight lines of ancient Greek and Roman architecture, the curves of the curucle and klismos chairs also make a reappearance. 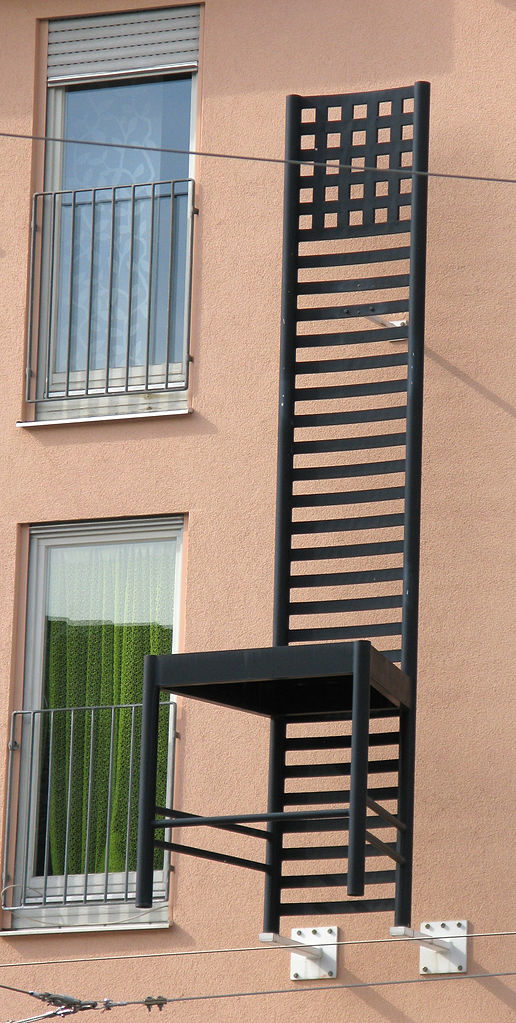 Like the Neoclassical period, the Victorian era referenced the past, this time through revivals of Gothic, Renaissance and Rococo styles. Dissatisfied with the opulence of these styles, designers of the Arts and Crafts movement returned to clean lines, geometric shapes, and the “honesty” of making the structure and craftsmanship of the piece visible rather than covering it up with upholstery or ornamentation. Charles Rennie Mackintosh used exaggerated heights and rectilinear patterns to dramatic effect in his architecture as well as his furniture.

Josef Hoffman also emphasized straight lines and geometric shapes, and many of his furniture designs featured the square and cube. Hoffman often combined linear patterns with rich materials for a luxurious look, as in the Kubus Chair. 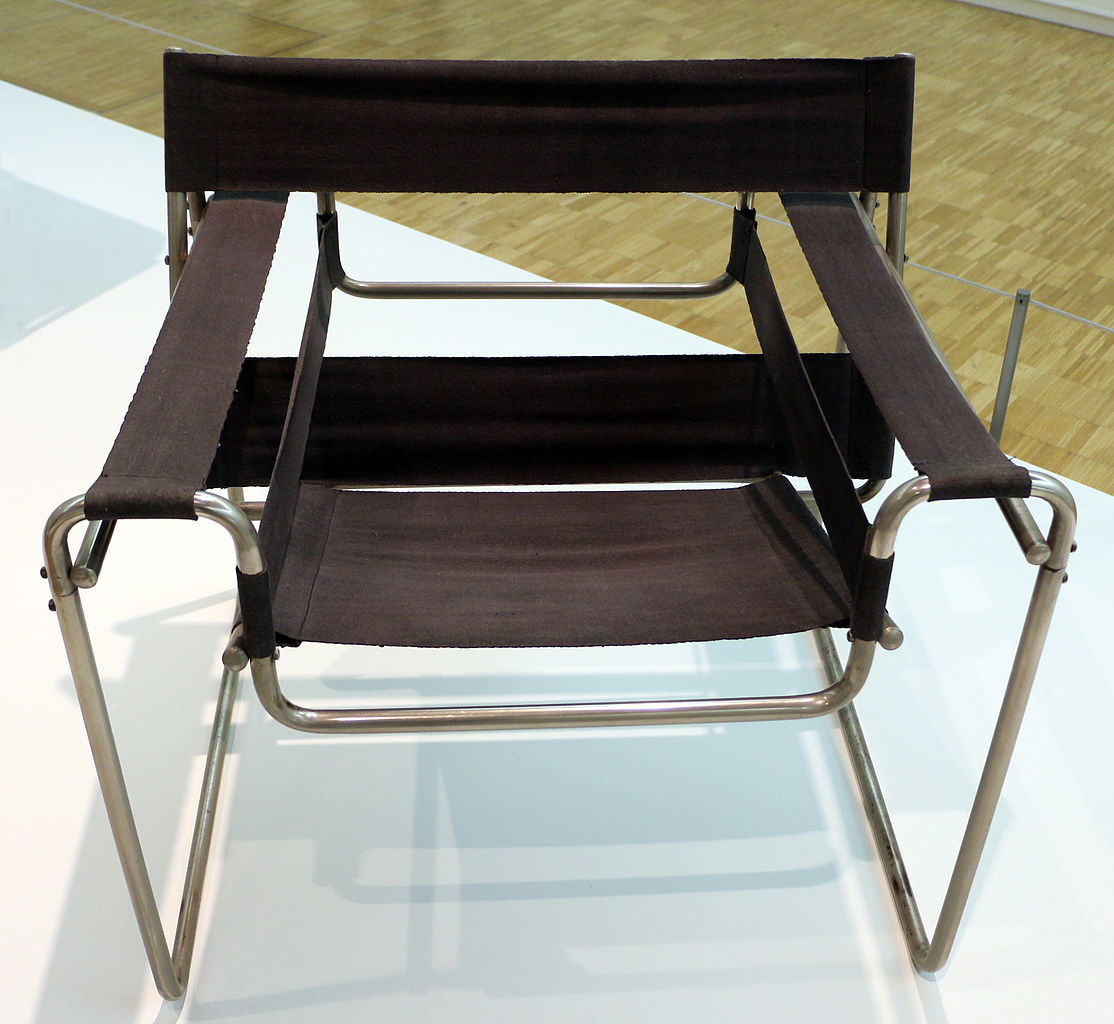 Modernism took off after World War I, and designers began designing furniture with mass production in mind. Compared with earlier styles, Modern furniture is stark, plain and industrial. To create affordable and lightweight furniture, designers turned to tubular steel, usually plated with chrome, and bent plywood, which eliminated many of the joints required in more traditional pieces.  Marcel Breuer’s Wassily Chair is a perfect example of a chair stripped down to the basics. The tubular steel frame is completely bolted together and uses no welding, while slings of Eisengarn fabric cradle the body.

Perhaps one the most furniture famous designs of the 20th century is the Barcelona Chair, designed by Ludwig Mies van der Rohe for the Pavilion of the Weimar Republic  at the 1929 World Exposition in Barcelona.  Like the architecture of the pavilion, also designed by Mies, the Modernist furnishings display the honesty of the Arts and Crafts movement along with the minimalism of the new Modern style. Yet even in this classic of Modernism we can see the influence of the ancient Roman curule chair in the diagonal cross braces. 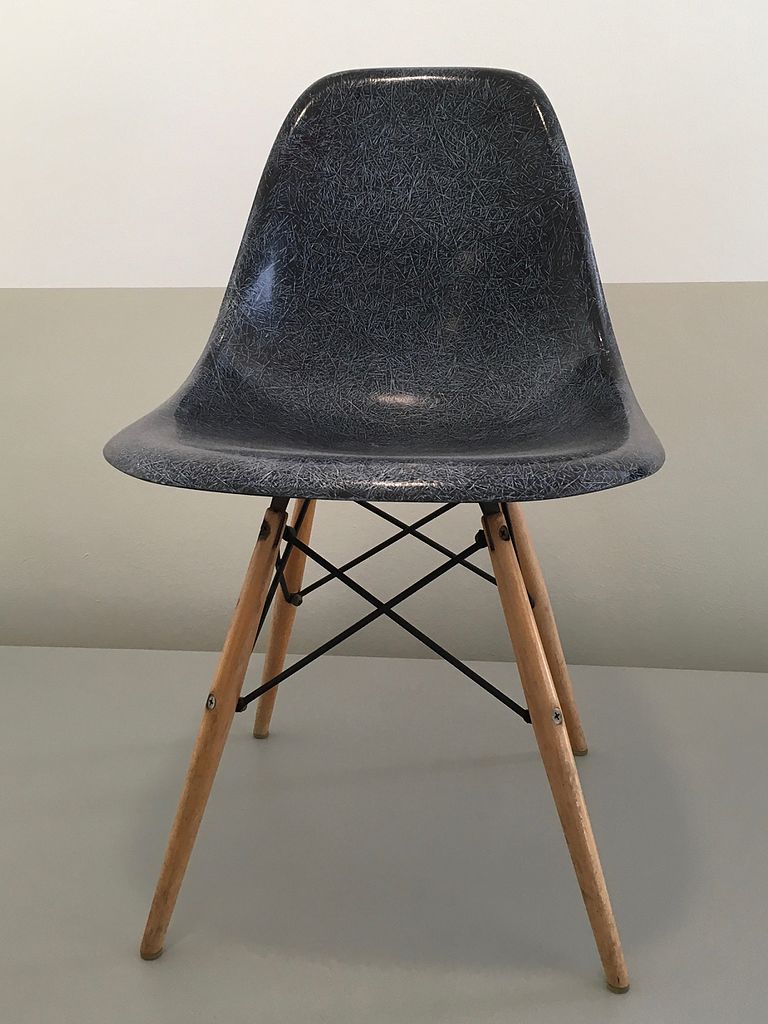 Another iconic chair of the 20th century, designed by Charles and Ray Eames, took advantage of a relatively new material: petroleum-based plastic. Their molded plastic chairs were designed with mass production in mind and are still produced today. “The need for well-designed, moderately priced furnishings for the vast majority of people; furnishings that could be easily moved, stored and cared for, thus meeting the demand of modern living.” Charles and Ray Eames 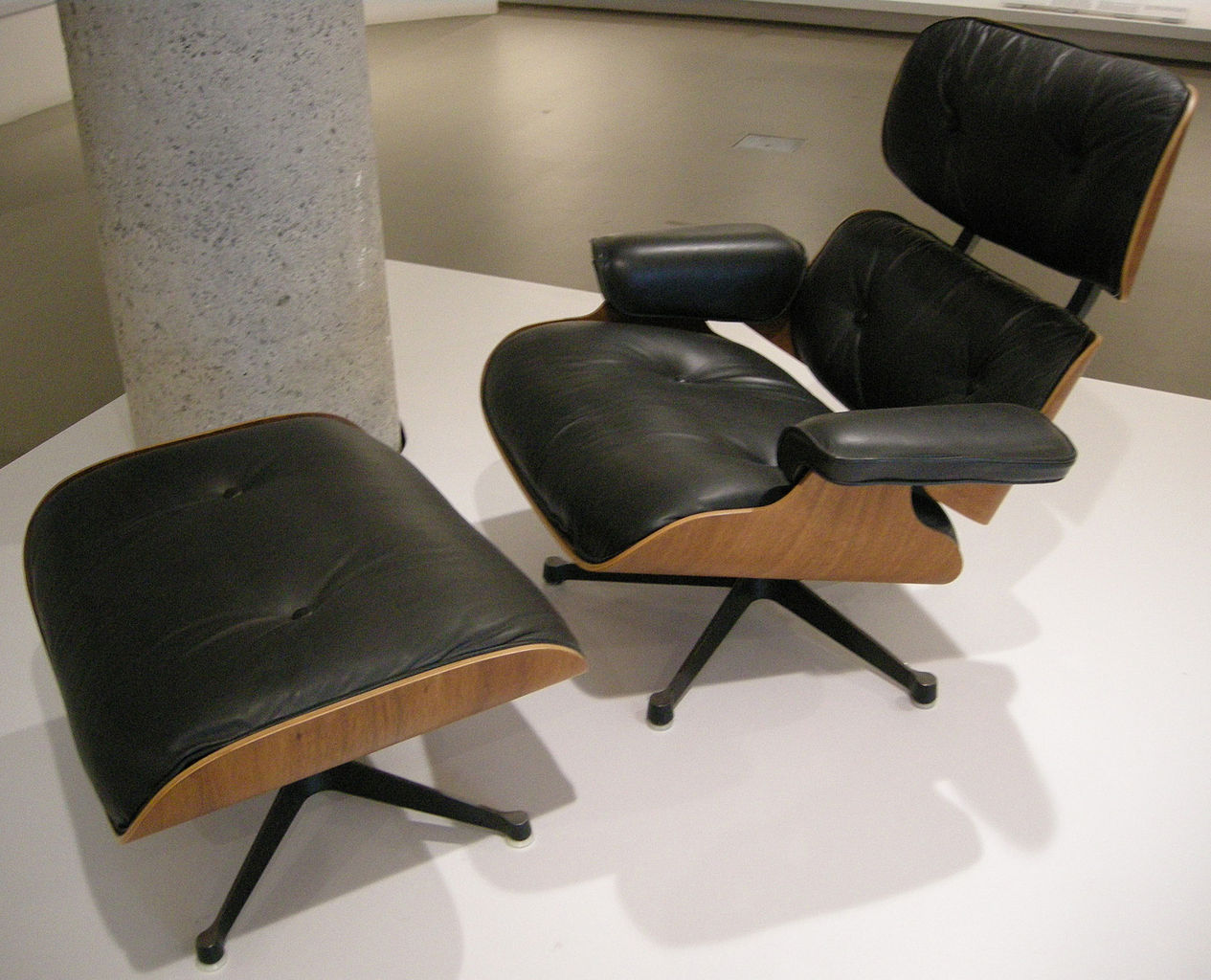 Mixing comfort and luxury, the Eameses created their iconic lounge chair and ottoman in 1956. Using a method of bending plywood pioneering by Charles Eames and Eero Saarinen, it was also designed with mass production in mind. The chair is composed of three pieces bolted together and onto the pedestal. The result is a classic, comfortable chair still in high demand today.

Clearly, chairs are more than just objects to sit on. We lounge in them. We create, solve, share and think while seated. For now, the chair remains a comforting fixture in our society, necessary to all that we do but so ubiquitous that we don’t give it a second thought. Will there ever come a time when we will no longer rely on a chair for our day-to-day activities? With rapid advances in technology now greatly affecting how humans relate to one another (or even ourselves), it will be interesting to see how the chair will morph to keep up with our evolving lifestyles.